-The Vedic period (or Vedic age) (ca.1750–500 BCE) was the period in Indian history during which the Vedas, the oldest scriptures of Hinduism, were composed. 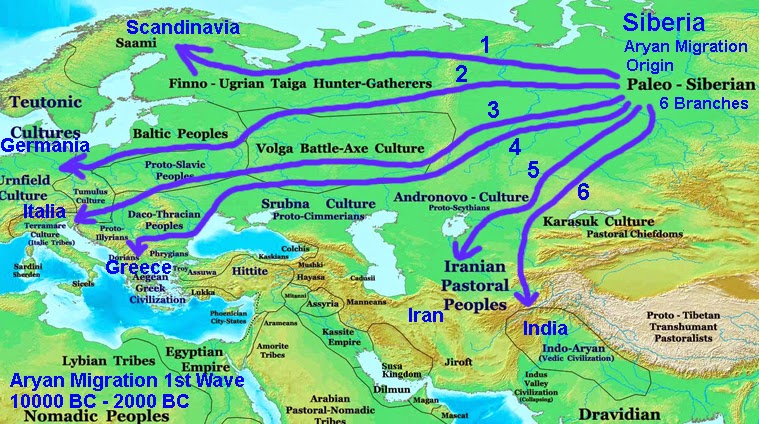 -The people who evolved this culture called themselves Aryas or Aryans and were probably an invading or immigrant people, whose first arrival in India is dated a little earlier than 1500 B.C.
-The location of the original home of the Aryans still remains a controversial point. Some scholars believe that the Aryans were native to the soil of India and some believe that the Aryans were migrated from outside (Central Asia/Europe/Arctic Region)


-Boghazkai Inscription (Asia Minor, Turkey), which mentions 4 vedic gods Indra, Varuna, Mitra and Nasatyas, proves central Asian theory as their homeland.
- In the Rigveda, the land where the Vedic Aryans lived is called by the name of Sapta-Sindhu or the ‘land of the seven rivers’ which included the Indus or Sindhu with its principal tributaries on the west and the river Saraswati on the east.
-Major vedic gods: Indra, varuna, Agni, surya, Pushan, Soma, Maruts, Vayu, Tvastri, Rudra, Dyaus, Aditi,Usha,Prithvi, Ratri, Aranyani.

1. Samhitas or Vedas or Apaurasheya
-It’s a collection of four books which contains hymns, which were sung in praise of Gods.
-There four Vedas are:
a. Rig Veda: It is a collection of hymns for use at sacrifice. It contains 1017 hyms and is divided in 10  mandals.

b. Sama Veda: It is a collection of verses from Rig Veda with exception of 75 hymns. It is known as chants and is sung at the time of soma sacrifices.
c. Yajur Veda: It’s a book of sacrificial formula. It has two parts, Black Yajur Veda (Prose) and white Yajur veda (Hymns)
d. Atharva Veda: It contains charms and spells to ward of evils and diseases. It is know as book of magical formulae.

2.   Brahamans
-Brahama means, ‘sacrifice’.
-They are commentaries on Vedas which explains the hymns of Vedas, meaning of sacrifices and the method of performing them.

3. Aranyakas
-They are called the ‘Forest Books’ which are the concluding portions of the Brahamanas.
-It deals with mysticism and philosophy.

4. Upanishads
-They are generally called Vedanta, as they came towards the end of the Vedas.
-It teaches philosophies of Vedas. It deals between the creator and the created.
-There are 108 Upanishadaas.
-Vrihadarayanka is the oldest Upanishada.

5. Vedangas
-They are the limbs of the Vedas.
-Six Vedangas:
a. Kalpa
b. siksha
c. Vyakarans
d. Nirukta
e. Chhanda
f. Jyotish 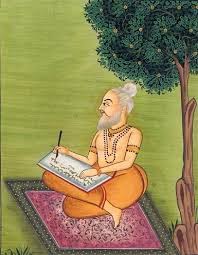 10. Puranas
-There are 18 puranas
-oldest purana is Matsya Purana

- Military conflicts between the various tribes of Vedic Aryans are also described in the Rig Veda. Most notable of such conflicts was the battle of ten Kings which took place on the banks of the river Parushni (modern day Ravi).
- The battle was fought between the tribe Bharatas, led by their chief Sudas, against a confederation of ten tribes -Puru, Yadu, Turvasha, Anu, Druhyu, Alina, Bhalanas, Paktha, Siva, Vishanin. This batlle was won by sudas.
-  Purukutsa, the chief of Purus, was killed in the battle and the Bharatas and the Purus merged into a new tribe Kuru after the war.

- After the 12th century BCE, as the Rig Veda had taken its final form, the Vedic culture extended into the western Ganges Plain.
-  This period saw also the beginning of the social stratification by the use of Varna, the division of Vedic society in Kshatriya, Brahmins, Vaishya and Shudra.
- The development of the varna system, which created a hierarchy of priests, warriors, and free peasants, ultimately led to the excluding of indigenous peoples by labelling their occupations impure.
- The most famous of new religious sacrifices that arose in this period was the Ashvamedha (horse sacrifice).
- The Kuru Kingdom, the earliest Vedic "state", was formed by a "super-tribe" which joined several tribes in a new unit.
- Two key figures in this process of the development of the Kuru state were the king Parikshit and his successor Janamejaya, transforming this realm into the dominant political and cultural power of northern Iron Age India.
- The Kuru kingdom declined after its defeat by the non-Vedic Salva tribe, and the political centre of Vedic culture shifted east, into the Panchala kingdom on the Ganges.