Primary functions of a bank - Notes for IBPS PO


The Banks has two primary functions , They are acceptance of deposits and advancing loans, More about them is given below.

(a) Current Deposits (b) Savings Deposits, and (c) Fixed Deposits.

These deposits are also known as demand deposits. These deposits can be withdrawn at any time. Generally, no interest is allowed on current deposits, and in case, the customer is required to leave a minimum balance undrawn with the bank. Cheques are used to withdraw the amount. These deposits are kept by businessmen and industrialists .

This is meant mainly for professional men and middle class people to help them deposit their small savings. It can be opened without any introduction. Money can be deposited at any time but the maximum cannot go beyond a certain limit. There is a restriction on the amount that can be withdrawn at a particular time or during a week. If the customer wishes to withdraw more than the speciﬁed amount at any one time, he has to give prior notice. Interest is allowed on the credit balance of this account. The rate of interest is greater than the rate of interest on the current deposits and less than that on ﬁxed deposit. This system greatly encourages the habit of thrift or savings.

These deposits are also known as time deposits. These deposits cannot be withdrawn before the expiry of the period for which they are deposited or without giving a prior notice for withdrawal. If the depositor is in need of money, he has to borrow on the security of this account and pay a slightly higher rate of interest to the bank. They are attracted by the payment of interest which is usually higher for longer period. Fixed deposits are liked by depositors both for their safety and as well as for their interest. In India, they are accepted between three months and ten years. 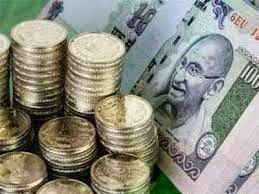 The second primary function of a commercial bank is to make loans and advances to all types of persons, particularly to businessmen and entrepreneurs. Loans are made against personal security, gold and silver, stocks of goods and other assets. The most common way of lending is by:

In this case, the depositor in a current account is allowed to draw over and above his account up to a previously agreed limit. Suppose a businessman has only Rs. 30,000/- in his current account in a bank but requires Rs. 60,000/- to meet his expenses. He may approach his bank and borrow the additional amount of Rs. 30,000/-. The bank allows the customer to overdraw his account through cheques. The bank, however, charges interest only on the amount overdrawn from the account. This type of loan is very popular with the Indian businessmen.

Under this account, the bank gives loans to the borrowers against certain security. But the entire loan is not given at one particular time, instead the amount is credited into his account in the bank; but under emergency cash will be given. The borrower is required to pay interest only on the amount of credit availed to him. He will be allowed to withdraw small sums of money according to his requirements through cheques, but he cannot exceed the credit limit allowed to him. Besides, the bank can also give speciﬁed loan to a person, for a ﬁrm against some collateral security. The bank can recall such loans at its option.

This is another type of lending which is very popular with the modern banks. The holder of a bill can get it discounted by the bank, when he is in need of money. After deducting its commission.

Bank also grant loans for a very short period, generally not exceeding 7 days to the borrowers, usually dealers or brokers in stock exchange markets against collateral securities like stock or equity shares, debentures, etc., offered by them. Such advances are repayable immediately at short notice hence, they are described as money at call or call money.

Banks give term loans to traders, industrialists and now to agriculturists also against some collateral securities. Term loans are so-called because their maturity period varies between 1 to 10 years. Term loans, as such provide intermediate or working capital funds to the borrowers. Sometimes, two or more banks may jointly provide large term loans to the borrower against a common security. Such loans are called participation loans or consortium ﬁnance.