•No increase in passenger fares
•No new trains announced
•Tickets can be booked 120 days in advance instead of 60 days to tackle tout menace
•Outlay for passenger amenities increased by 67%
•Plan expenditure to go up to a record Rs. 1.1 lakh crore in 2015-16 from an estimated Rs. 61,500 crore in 2014-15.
•Central government to outlay likely to at 41 per cent (Rs.45,100 crore) in 2015-16
•The speed passenger trains across nine corridors will be increased to 160-200 km from 110 km
•SMS alert to be introduced for train timings
•To introduce air-conditioned coaches for suburban trains
•Wi-fi to be available at 400 railway stations
•To develop 10 satellite railway stations this year.
•800 km of gauge conversion will be commissioned
•E-catering introduced in 108 trains, can order on IRCTC website
•On-board entertainment facility could be extended on Shatabdi trains
•Mobile charging stations will be introduced general class coaches
•Railways plans to spend over Rs. 8 lakh crore over five years
•Pension funds, multi-lateral banks have evinced interest in Railways
•Proposed the best operating ratio in nine years, of 88.5 per cent for 2015-16
•Railways to go through transformation in five years; to increase track capacity by 10 per cent to 1.38 lakh km
•Wagon-making scheme to be reviewed to make it easier for private investment
•All India 24x7 grievances helpline 138 to start soon
•7,000 more toilets to be replaced by Bio-Toilets, New toilets at 650 stations, more  vaccum toilets
•Passenger travelling unreserved can procure a ticket within 5 minutes
•Centrally managed railway display network in over 2000 stations in next 2 years
•Rail-cum-road ticket to be extended to many stations
•Transport Logistic Corporation of India to be set up to aid expanding freight handling capacity and provide end-to-end logistic solutions
•PPP model will help to augment resources and generate more employment
•6608 kms of track to be electrified
•Projects worth Rs. 96,182 crore to expand capacity of 9,420 km rail lines
•CCTVs to be introduced in select trains and suburban trains for women safety
•Train Protection Warning System, Train Collision Avoidance System
•To set up full-fledged Railway University in FY16
•Rs.2000 crore for Coastal Connectivity Program; Rs.2500 crore through BOT/Annuity route
•917 safety work projects to eliminate over 3,000 unmanned crossings in all states
•To set up infra fund, JV with IRFC for long-term funding

The Minister of Railways Shri Suresh Prabhakar Prabhu while presenting the Railway Budget 2015-16 in Parliament today has said that there are nine thrust areas in this Budget which are as follows: 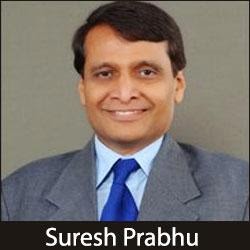 1.Indian Railways to become prime mover of economy once again
2.Resource Mobilization for higher Investments
3.Decongestion of heavy haul routes and speeding up of trains: emphasis on gauge conversion, doubling, tripling and electrification
4.Project delivery
5.Passenger Amenities.
6.Safety
7.Transparency & System Improvement.
8.Railways to continue to be the preferred mode of transport for the masses.
9.Sustainability.