It is appointed by President Under article 280 of the constitution. It has Five Members including a Chairperson. First FC  came in 1951 under K. C. Neogy and 14th FC eastablished in 2012 under Dr.Y. V Reddy for duration 2015-2020.The Fourteenth Finance Commission consisting of Dr. Y.V.Reddy, former Governor Reserve Bank of India, as the Chairman and the following four other members, namely: -

i.Distribution of net proceeds of taxes between Centre and the States, to be divided as per their respective contributions to the taxes.
ii.Determine factors governing Grants-in Aid to the states and the magnitude of the same.
iii.To make recommendations to president as to the measures needed to augment the Consolidated Fund of a State to supplement the resources of the panchayats and municipalities in the state on the basis of the recommendations made by the Finance Commission of the state.
iv.FC deals only with the revenue collected through the taxes by the centre i.e. corporeation,custom,excise,income,service taxes. These make up two thirds of the central receipts. 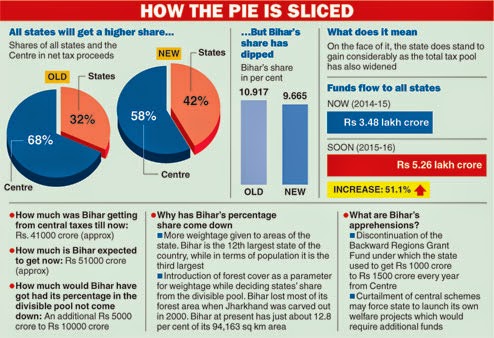 iii.NATIONAL SMALL SAVING FUND (NSSF)
The panel has also called for excluding states from operation of the National Small Savings Fund (NSSF) from April 1, 2015. It says the exclusion will hamper the overall borrowing programme of the states and they will continue to have access to open market operations.

vi.Fiscal Responsiblity and Budget Management (FRBM) Act
It has also recommended that the Centre should consider an amendment to the Fiscal Responsiblity and Budget Management (FRBM) Act to strike out the definition of effective revenue deficit from April 1,2015 as it does not fit with global practices of classification of accounts expenditure.The panel has also said that the Union and state governments may also amend their respective FRBM Acts to provide a statutory ceiling on the sanction ofnew capital works to an appropriate multiple of the annual Budget provisions.