A to Z of BASEL Norms

February 12, 2015
Basel Committee on Banking Supervision:
i. The Basel Committee on Banking Supervision is an institution of Governors of the Central Banks of “G-10” nations and was formed in 1974.
ii. The Committee is a forum for discussion on the handling of specific supervisory problems.
iii. It coordinates the sharing of supervisory responsibilities among national authorities in respect of banks' foreign establishments with the aim of ensuring effective supervision of banks' activities worldwide.
iv. The committee operates from Basel in Switzerland.


What is CAR?
Capital adequacy provides regulators with a means of establishing whether banks and other financial institutions have sufficient capital to keep them out of difficulty. Regulators use a Capital Adequacy Ratio (CAR), a ratio of a bank’s capital to its assets, to assess risk. 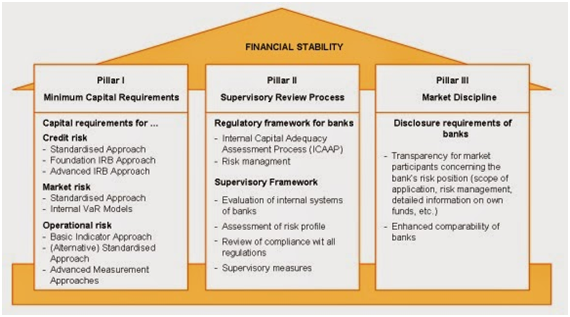 Basis of Capital in Basel – I

Tier I (Core Capital): Tier I capital includes stock issues (or share holders equity) and declared reserves, such as loan loss reserves set aside to cushion future losses or for smoothing out income variations.
Tier II (Supplementary Capital): Tier II capital includes all other capital such as gains on investment assets, long-term debt with maturity greater than five years and hidden reserves (i.e. excess allowance for losses on loans and leases). However, short-term unsecured debts (or debts without guarantees), are not included in the definition of capital.

Limitations of Basel – I Norms
Basel – II Norms
Basel – II norms are based on 3 pillars:
Minimum Capital – Banks must hold capital against 8% of their assets, after adjusting their assets for risk
Supervisory Review – It is the process whereby national regulators ensure their home country banks are following the rules.
Market Discipline – It is based on enhanced disclosure of risk 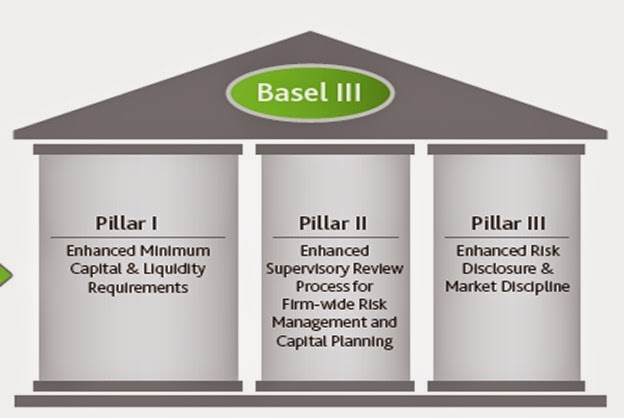