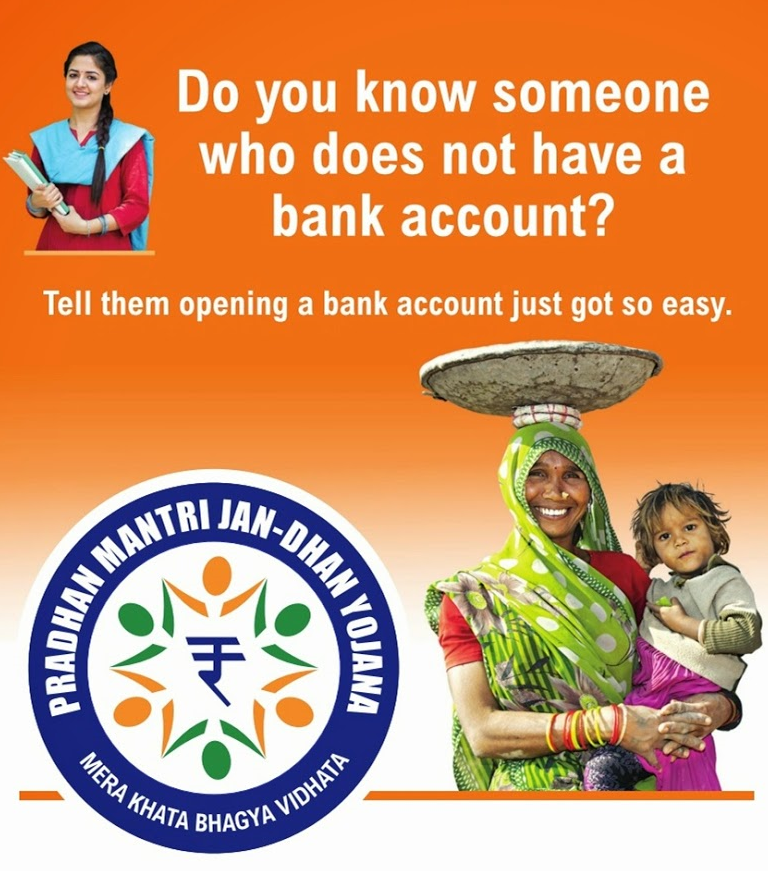 It is a National Mission to ensure access to financial services, namely, Banking/ Savings & Deposit Accounts, Remittance, Credit, Insurance, Pension in an affordable manner.
Run by Department of Financial Services, Ministry of Finance, on the inauguration day, 1.5 Crore (15 million) bank accounts were opened under this scheme.


Under the Jan Dhan Yojna anyone who is India citizen above age of 10 years and does not have a bank account, can open the account with zero balance. Account can be opened in any bank branch or Business Correspondent (Bank Mitr) outlet, specially designed for the purpose of opening the accounts under this scheme. PMJDY accounts are being opened with Zero balance. However, if the account-holder wishes to get cheque book, he/she will have to fulfill minimum balance criteria.

"Pradhan Mantri Jan Dhan Yojana (PMJDY) has also entered the Guinness Book of World Records for opening the highest number of accounts in the shortest period of time. As many as 11.50 crore bank accounts were till January 17 this year, surpassing the target of opening 7.5 crore bank accounts by January 26. A total amount of Rs 9,188 crore has been accumulated in the accounts opened under PMJDY."

Purpose of PMJDY?
The scheme has been started with a target to provide 'universal access to banking facilities' starting with "Basic Banking Accounts" with overdraft facility of Rs.5000 after six months and RuPay Debit card with inbuilt accident insurance cover of Rs. 1 lakh and RuPay Kisan Card. In next phase, micro insurance & pension etc. will also be added.

(Rupay Debit Card is an indigenous domestic debit card introduced by National Payment Corporation of India (NPCI). This card is accepted at all ATMs (for cash withdrawal) and at most of the PoS machines (for making cashless payment for purchases) in the country)

What are the documents required to open an account under Pradhan Mantri Jan-Dhan Yojana?
1. If Aadhaar Card/Aadhaar Number is available then no other documents is required. If address has changed, then a self certification of current address is sufficient.
2. If Aadhaar Card is not available, then any one of the following Officially Valid Documents (OVD) is required: Voter ID Card, Driving License, PAN Card, Passport & NREGA Card. If these documents also contain your address, it can serve both as “Proof of Identity and Address”.
3. If a person does not have any of the “officially valid documents” mentioned above, but it is categorized as ‘low risk' by the banks, then he/she can open a bank account by submitting any one of the following documents:

How is PMJDY different from the earlier Financial Inclusion Plan (Swabhimaan)?

List of Banks authorized to open accounts in Jan Dhan Yojana Scheme
Jan Dhan account can be opened at all the public sector banks and majority of private sector banks.