February 20, 2015
Enhanced greenhouse effect results in 'Global warming'. Greenhouses gases such as carbon dioxide, methane, nitrous oxide and chlorofluorocarbons (CFCs) trap the long-wave radiation from the Earth causing the atmosphere to excessive heat up. Water vapor is the most abundant greenhouse gas.
With time the rate of increasing atmospheric temperature is accelerating. 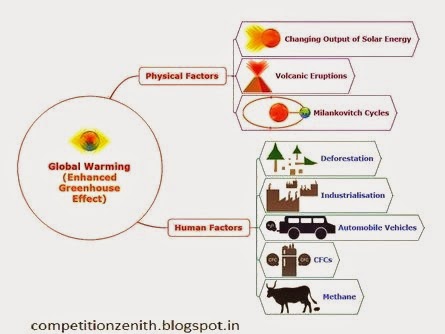 Changing Output of Solar Energy:
Peaks of sunspot activity seem to raise global mean temperatures.
Note - Sunspots are areas where the magnetic field is about 2,500 times stronger than Earth's, much higher than anywhere else on the Sun.

Volcanic Eruptions:
After very violent eruptions, enormous quantities of volcanic dust particles are ejected high into the atmosphere. Global winds distribute the particles, therefore reducing temperatures by shielding the Earth from incoming insolation (total amount of solar radiation energy received on a given surface area during a given time).

Milankovitch Cycles:
Variations in the Earth's eccentricity, axial tilt, and precession comprise the three dominant cycles, collectively known as the Milankovitch Cycles for Milutin Milankovitch, the Serbian astronomer and mathematician who is generally credited with calculating their magnitude. Taken in unison, variations in these three cycles creates alterations in the seasonality of solar radiation reaching the Earth's surface. These times of increased or decreased solar radiation directly influence the Earth's climate system, thus impacting the advance and retreat of Earth's glaciers.

Deforestation:
The clearance and burning of the rainforests for wood and farming land adds to the level of atmospheric CO2 by reducing photosynthesis.

Nitrous Oxide:
Automobile Vehicles have release nitrous oxide from their exhausts. Also produced by soil cultivation practices, especially the use of commercial and organic fertilizers, fossil fuel combustion, nitric acid production, and biomass burning. This pollution affects the ozone layer which help keep out much of the sun’s unwanted rays but all the pollution is making holes in it and letting more energy through.

CFCs:
CFCs from aerosols and refrigerators have reacted with the ozone layer causing thinning and holes. Now largely regulated in production and release to the atmosphere by international agreement for their ability to contribute to destruction of the ozone layer. While emissions of these gases are less concentrated than their predecessors, they are potent, synthetic greenhouse gases. As a greenhouse gas, methane is 23 times more potent than carbon dioxide.

Methane:
A hydrocarbon gas produced both through natural sources and human activities, including the decomposition of wastes in landfills, agriculture, and especially rice cultivation, as well as ruminant digestion and manure management associated with domestic livestock. On a molecule-for-molecule basis, methane is a far more active greenhouse gas than carbon dioxide, but also one which is much less abundant in the atmosphere.