February 07, 2015
Gravitation is the force of attraction between two objects in the universe.

Every particle of matter in the universe attracts every other particle with a force that is directly proportional to the product of the masses of the particles and inversely proportional to the square of the distance between them.
Mathematically, this law, and the magnitude of the force due to the gravitational interaction between two particles, is expressed with

The gravitational force of earth is called gravity. The acceleration produced in a body due to force of gravity is called acceleration due to gravity. It is denoted by ‘g’ and its value is 9.8 metre/ sq. second.


Weight of a body in a lift: 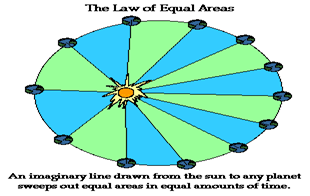 The Law of Harmonies:

If ‘P’ is the time taken for a planet to complete an orbit round the sun, and ‘R’ is the mean value between the maximum and minimum distances between the planet and sun, then,

Satellites are natural or artificial bodies revolving around a planet under its gravitational attraction. Moon is a natural satellite while INSAT-IB is an artificial satellite of earth.

Orbital Speed of a Satellite:


Period of Revolution of satellite:
Time taken by a satellite to complete one revolution in its orbit is called period of revolution

The period of revolution of satellite revolving near the surface of earth is 1 hour 24 minute (84 minute).

Escape velocity is that minimum velocity with which a body should be projected from the surface of earth so as it goes out of gravitational field of earth and never return back.