Six Reasons To Cut Repo Rate And Its Impact

March 04, 2015
In a move that cheered markets and India Inc, RBI governor Raghuram Rajan on Wednesday cut repo rate by 25 basis points to 7.5% from 7.75%. The move comes on the back of lower inflation and Rajan's thumbs up to measures announced by Finance Minister Arun Jaitley in Budget 2015.

What is repo rate?

Repo rate is the rate at which the central bank of a country (RBI in case of India) lends money to commercial banks in the event of any shortfall of funds.

We take a look at six key reasons that led Rajan to cut repo rate:

1) Reforms in Budget:
i. There are many important and valuable structural reforms embedded in this Budget, which will help improve supply over the medium term. In the short run, however, the postponement of fiscal consolidation to the 3 per cent target by one year will add to aggregate demand. At a time of accelerating economic recovery, this is, prima facie, a source for concern from the standpoint of aggregate demand management, especially with large borrowings intended for public sector enterprises
ii. Also, the government is transferring a significantly larger amount to the states, without entirely devolving responsibility for funding central programmes. To the extent that state budget deficits narrow, the general fiscal deficit will be lower. 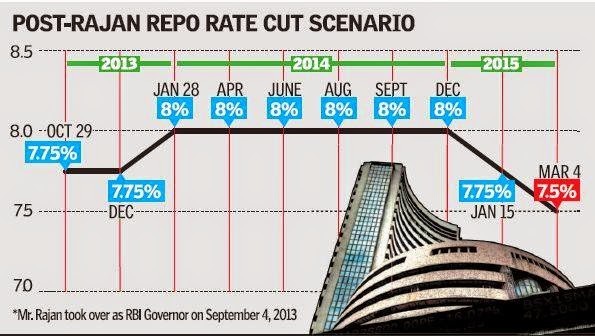 2) Cutting subsidies:
Rajan goes on to acknowledge that supported by lower international energy prices, there is a welcome intent to shift from spending on subsidies to spending on infrastructure, and to better target and further reduce subsidies through direct transfers. 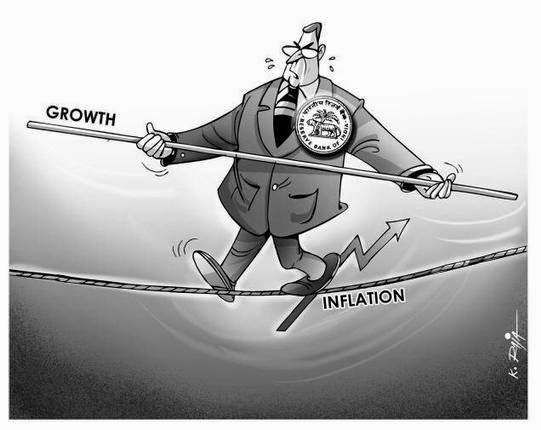 4) New GDP data:
i. The Central Statistical Organisation is to be commended on the changes it has made to the methodology of estimating GDP, bringing India up to international best practice.
ii. Yet the picture it presents of a robust economy, with growth having picked up significantly over the last three years, is at odds with still-low direct measures of growth of production, credit, imports and capacity utilisation as well as with anecdotal evidence on the state of the economic cycle

5) Strong rupee:
i. The rupee has remained strong relative to peer countries but excessively strong rupee is undesirable, it too creates disinflationary impulses
ii. the Reserve Bank does not target a level for the exchange rate, nor does it have an overall target for foreign exchange reserves.

6) Downward inflation trajectory:
i. Inflation in January 2015 at 5.1% as measured by the new index was well within the target of 8 per cent for January 2015.
ii. Prices of vegetables declined and, hearteningly, inflation excluding food and fuel moderated in a broad-based manner to a new low. Thus, disinflation is evolving along the path set out by the Reserve Bank in January 2014

We take a look at 6 ways in which it will impact you:

1. EMIs to come down
A 25 basis points cut in home loan rate will bring down EMIs by Rs 842 on a Rs 50 lakh loan tenure of 20 years.
2. Improved market sentiment
The ripple effect of this rate cut has already been seen in the form of improved market sentiment with Sensex hitting 30,000 for the first time and Nifty breaching 9,100 level in opening trade.
3. Banks to gain
Banks will gain as the value of their bond portfolio rises; companies will get stronger as interest costs fall.
4. Corporates to benefit too
Corporate loans, too, are set to get cheaper and hence the expected disbursement of those will increase.
5. Companies can raise equity
Improved market sentiment will enable companies to raise equity, enhance prospects for government divestment.
6. Economy growth to get momentum
With more consumer spending and easy availability of loans -corporate as well as consumer- the economy growth is likely to pick up pace.