March 25, 2015
What exactly is the demographic dividend? 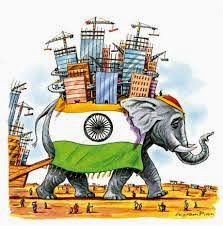 Demographic Dividend
Demographic Dividend is the economic benefits that derive from demographic change. It is a population bulge in the working age category. It occurs when a falling birth rate changes the age distribution of a population so that fewer investments are needed to meet the needs of the youngest age groups and resources are released for investment in economic development and family welfare. At this stage, there are relatively more adults in the population of the productive labour force. By demographic  dividend, we mean a rise in the rate of economic growth due to a rising share of the working age population. It may occur only once during a demographic transition and lasts for just a few decades.

Demographic dividend is essentially due to 2 factors:
(a) Declining birth rate and
(b) Improvement in life expectancy

How Does Demographic Dividend Help?
Demographic dividend is delivered through several mechanisms. These are mentioned here under.

1. Labour Supply:
The country’s economic boom depends on a young and productive labour force. The children born during periods of high fertility finally leave the dependent years and can become workers. Women now have fewer children than before. They are better educated than older cohorts. They are not confined now to their home only. Women are employed in jobs outside of the home. So they are productive in the labour force. This force plays a pivotal role in helping any country’s economy to take off.

2. Savings:
The demographic transition affects the savings, which in turn affects the prospects for investments and growth. Working-age adults tend to earn more and can save more money than the very young. Personal savings grow and serve as a partial resource for industrial investments that fuel economic growth. As the number of dependents decreases individuals can save more. This increase in national savings rates increases the stock of capital in developing countries and leads to higher productivity as the accumulated capital is invested.

3. Human Capital:
The demographic transition begins with changes in mortality that results in a population that lives longer and stays healthier. A longer life expectancy causes fundamental changes in the way that people live. Decreases in fertility rates result in healthier women and fewer economic pressures at home. This also allows parents to invest more resources per child that leads to better health and educational outcomes. Participation of women in the labour force enhances their social status and personal independence. A society, which is experiencing a demographic dividend, is certain to experience deep-rooted changes in its culture.

4. Increasing Domestic Demand:
The increasing domestic demand is brought about by the increasing GDP per capita and the decreasing dependency ratio.

·  Currently, the supply of skilled manpower in India is approximately 3.4 million. According to the ILO, there will be a demand for 500 million skilled workers in India by 2022. A wide gap of 496.6 million skilled workers needs to be filled in eight years.
·  With one of the youngest populations in the world and a large pool of young English-speaking people, population demographics favour India.
·   By 2022, the average Indian’s age would be 29, compared to 37 for China and the US, and 45 for Western Europe. India has the potential not only to meet its own manpower needs but it can also cater to the manpower demand of other nations.
· The second point is that as young people get more educated, they will not want to work in agriculture (currently the biggest employer — it engages half the workforce).
·   They will want semi-skilled/ skilled jobs in construction, which currently employs 12 per cent of the workforce and is exhibiting the fastest growth.
·   The third point is that a rising share of those educated, at least up to the secondary level, will be girls. The labour force participation rate for women in India is one of the lowest in the world. This is set to change, provided appropriate non-agriculture jobs exist, such as in garment manufacturing or modern services.
·   If investment in rural and urban infrastructure, housing and rural public works is sustained, the unskilled who leave agriculture will get absorbed in construction, as they have been for the last decade or more. But the first three challenges are much more serious.