March 07, 2015
Triangle
A triangle is a closed plane figure which has three sides. The word "triangle" is a Greek word. "Tri" means "three". Hence, it refers to a shape consisting of three internal angles and three sides.

The general shape of a triangle is shown below. 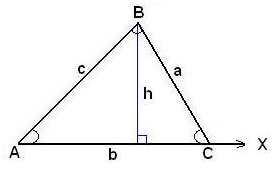 Triangle Definition
A triangle is a polygon having three sides. A perpendicular drawen from a vertex to the opposite side is called as the height of triangle and is denoted as 'h'.


Triangles are classified on the basis of their angles and sides:

Types of triangles based on their sides
1. Scalene triangle

Triangles based on their angles 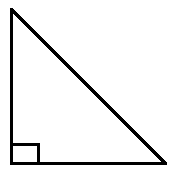 Properties of a triangle

Property 1: Triangle Sum Theorem - The sum of the 3 angles in a triangle is always 180°.
Example :

Property 2: The sum of an interior angle and its adjacent exterior angle is 1800.
Example:

Property 3 : Exterior Angle Theorem : An exterior angle of a triangle is equal to the sum of the two opposite interior angles.
Example:

Here are some facts to remember:

Examples on above properties: -
Example:1
Find the value of x in the following triangle.

Example :2
Find the values of x and y in the following triangle.