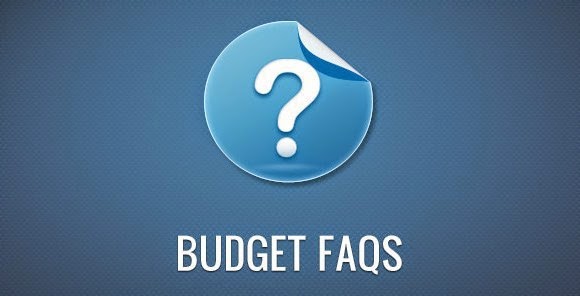 1. WHAT IS THE BUDGET?
A Government budget is a legal document that is:
It is an annual financial statement of estimated receipts and expenditures of the Government
of India in respect of each financial year.

2. WHAT ARE THE DIFFERENT TYPES OF BUDGET PRESENTED?
The Union Budget is presented to the Parliament in two parts:
a. Railway Budget pertaining to "Railway Finance".
b. General Budget, which gives an overall picture of financial position of the Government of
India. It includes the effect of "Railway Budget”.

3. WHY DO WE NEED A BUDGET?
Government Budget is designed for optimal allocation of scarce resources.

4. WHAT IS THE PROCEDURE FOR APPROVAL OF UNION BUDGET BY THE PARLIAMENT?
The Budget process has the following procedures:

4. WHAT IS PLAN AND NON-PLAN EXPENDITURE?

6. WHAT IS CONSOLIDATED FUND OF INDIA?
Under Article 266(1) of the Constitution of India, Consolidated Fund of India is the most
important of all government funds. All revenues raised by government, money borrowed and
receipts from loans given by government flow into it. All government expenditures other
than certain exceptional items met from Contingency Fund and Public Account are made
from this account.
No money can be appropriated from the fund except in accordance with the law.

7. WHAT ARE THE DIVISIONS IN CONSOLIDATED FUND OF INDIA?
The Consolidated Fund of India is divided into:
a) REVENUE ACCOUNT: It deals with the proceeds of taxation and other receipts classed
as revenue and expenditure from it. Any expenditure that doesn’t involve creation of
assets is treated as revenue expenditure. Salaries, subsidies and interest payments are
examples of revenue expenditure.
b) CAPITAL ACCOUNT: It deals with the expenditure to create durable assets. It also
includes the receipts and borrowings required to cover the expenditure.
CAPITAL ACCOUNT is further divided into three:
1) CAPITAL EXPENDITURE: Expenditure incurred for the purpose of creation of
permanent assets or reduction of recurring liabilities. It also includes receipts of a capital
nature to be applied as set off to capital expenditure.
2) CAPITAL RECEIPTS: Receipts of capital nature which cannot be used as set off to
capital expenditure.
3) PUBLIC DEBT AND LOANS AND ADVANCES: Loans raised and their repayment,
advances made and their recoveries.

8. WHAT IS CONTINGENCY FUND OF INDIA?
Any urgent or unforeseen expenditure is met from this fund. It is constituted under Article
267 of the Constitution of India. It is a Rs 500 crore fund which is at the disposal of the
President of India. Any expenditure from this fund requires subsequent approval from the
Parliament and any amount withdrawn must be returned to the Contingency Fund from the
Consolidated Fund of India.

9. WHAT IS PUBLIC ACCOUNT?
Under provisions of Article 266(1) of the Constitution of India, Public Account is used in
relation to all the fund flows where Government is acting as a banker.
For e.g., Provident Funds and Small Savings. This money does not belong to government but
is to be returned to the depositors. The expenditure from it need not be approved by the
Parliament.

10. WHAT IS THE FRBM ACT?
The Fiscal Responsibility and Budget Management Act or the FRBM Act, 2003 is an Act
mandating Central Government to ensure intergenerational equity in fiscal management and
long term macro-economic stability.
The Act also aims at prudential debt management consistent with fiscal sustainability
through-

11. WHAT DOCUMENTS ARE LAID BEFORE THE PARLIAMENT UNDER
THE FRBM ACT 2003?
The Act stipulates that the following documents shall be laid before Parliament in addition to
the Budget documents -

12. WHAT IS THE OUTCOME BUDGET?

Outcome budget is a performance measurement tool that helps in:

13. WHAT ARE REVISED ESTIMATES?

14. WHAT ARE EXCESS GRANTS?
If the total expenditure under a Grant exceeds the provision allowed through its original
Grant and Supplementary Grant, if any, the excess requires regularization by obtaining
excess Grant from the Parliament under Article 115 of the Constitution of India. It will have
to go through the whole process as in the case of the Annual Budget, i.e. through
presentation of Demands for Grants and passing of Appropriation Bills.