Chapter 2 - The Earth and the Solar System

April 07, 2015
The Earth is a member of the Solar System. It is one of eight  major planets revolving round the Sun. Of these, Mercury and Venus are nearer, and Mars, Jupiter, Saturn, Uranus, Neptune and Pluto are farther away from the Sun than the Earth. 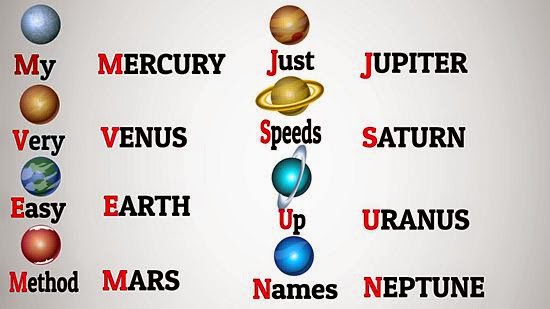 The planets radiate no light of their own, but shine with that reflected from the Sun. The Sun has a diameter of 864,000 miles (1,390,000 Kms) and it is 93,000,000 miles (150,000,000 Kms) from the Earth. The Sun is a star. The stars, unlike the planets, are self-luminous bodies. The other stars appear small because they are so far away; the nearest star, Proxima Centauri, is 200,000 times more distant from us than the Sun.
The Moon is a dead planet. It is about 240,000 miles (386,000 Kms) from the Earth. The Moon revolves round the Earth taking approximately 29 days to complete one round. The phases of the Moon are the result of its position in relation to the Earth and the Sun.
The Moon’s orbit is elliptical and inclined at an angle of 5o to the plane of the Earth’s orbit. This explains why we do not have a total eclipse of the Sun every time there is a new moon.

·        The Earth is a sphere but it is not a perfect sphere.
·        It is slightly flattened at the poles and bulges at the equator.
·        The circumference of the earth is approximately 25,000 miles (40,000 Kms).
·        It rotates on its axis once in every 24 hours, spinning from west to east. Besides spinning on its axis, it also moves round the Sun, called the revolution.
·        Its orbit round the Sun is oval or ecliptical.
·        The time taken to complete one revolution is approximately 365¼ days or one year.
·        For convenience, one year is taken as 365 days and the shortfall of ¼ day each year is made good in the Leap Year which consists of 366 days.
·        The Earth’s axis inclined to the plane of its orbit at an angle of 66½O.
·        The seasons are due to the change of the Earth’s position in the course of its revolution about the Sun, and to the inclination of its axis.
·        The Equator is an imaginary line drawn round the Earth midway between the Poles.
·        There are two other lines
Tropic of Cancer (23½O N) and the Tropic of Capricon (23½O S).
The word tropic means, ‘turning place’. The inclination of the Earth’s axis together with its revolution round the Sun is the cause of the varying length of day and night in different parts of the world.
· 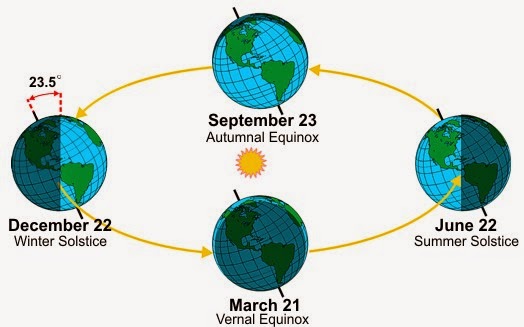 On March 21 (Vernal Equinox) and September 23 (Autumnal Equinox) the Sun is overhead at the Equator.

On these dates, except at the Poles,
(a) days and nights are equal all over the world
(b) the Sun rises exactly due east and set exactly due west at all places on the Earth’s surface. At the Equator itself days and nights are equal throughout the year.
·        Between March 21 and September 23,
When the North Pole is tilted towards the Sun, the days are longer than the nights throughout the Northern Hemisphere and there is continuous daylight at the North Pole.
·        Similar conditions are experienced in the Southern Hemisphere and the South Pole between September 25 and March 21.

The 4 Earth Seasons are

·        Spring: On March 21, the sun is directly overhead the equator. This is the season of spring in the northern hemisphere.
·        Summer: On June 21, the sun is directly overhead the Tropic of Cancer. Thus, the northern hemisphere experiences summer.
·        Autumn: On September 23, the sun returns to the equator, and the northern hemisphere experiences autumn.
·        Winter: On December 22, the sun is at the Tropic of Capricorn, and the northern hemisphere experiences winter.
Latitude and Longitude
International Date Line
·        It is the 180° meridian running over the Pacific Ocean, deviating at Aleutian Islands, Fiji, Samoa and Gilbert Islands.
·     Travelers crossing the Date Line from west to east (i.e., from Japan to USA) repeat a day and travelers crossing it from east to west (i.e., from USA to Japan) lose a day.
Earth Lunar Eclipse
·        When earth comes between sun and moon.
·        Occurs only on a full moon day. However, it does not occur on every full moon day because the moon is so small and the plane of its orbit is tilted about 5° with respect to the plane of the earth’s orbit. It is for this reason that eclipses do not occur every month.
·         This light is red because the atmosphere scatters the other colors present in sunlight in greater amounts than it does red.

Earth Tides
·        Refer to the phenomenon of regular rise and fall of the sea water. Though both sun and moon exert gravitational force on earth, resulting in the production of tides, the moon, by nature of its closeness to the earth, has greater control over the timings of the tidal rises and falls.
·        The interval between two tides is 12 hrs and 26 minutes.

Spring Tide
·        When the sun, moon and the earth are in a straight line, the gravitational force is at its greatest because tide producing forces of both sun and moon complement each other and they pull together. This produces tides of unusually great range, called the spring tide.
·     These occur about twice a month: at new moon when the sun and the moon are in conjugation and at full moon when they are in opposition.