There two ways to convey a message of a person, or the words spoken by a person to other person.
1.      Direct speech
2.      Indirect speech
Suppose your friend whose name is Vipul tells you in College , “I will give you a pen”. You come to home and you want to tell your brother what your friend told you. There are two ways to tell him. 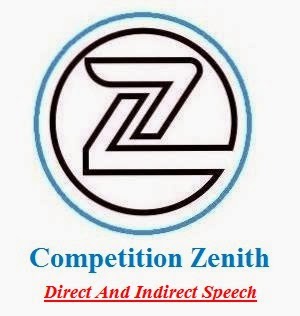 Change in tense of reported speech for all TENSES.

2. Mohan said to Stalin, “Why did not you attend the meeting yesterday”? (D.S.)
Mohan asked Stalin why he had not attended the meeting the day before. (I.S.)


3. “Alas! I have broken my brother’s watch” said he.
He exclaimed sorrowfully that he had broken his brothers watch. (I.S.)