i. In a first, a Mirage 2000 fighter aircraft of the Indian Air Force on Thursday successfully landed on the Yamuna Expressway near Mathura as part of trials to use national highways for emergency landing. 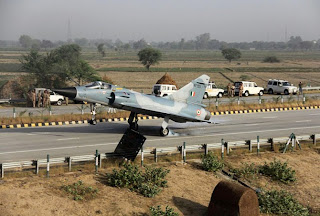 ii. The aircraft landed at 6.40 a.m., senior IAF officers said, adding that the force has plans to activate more such stretches on highways in the future. The IAF has been considering the use of national highways for emergency landing by fighter aircraft.

i. Infosys on 18 May 2015 announced to become carbon neutral by 2018. For this it earmarked an amount of 400 crore rupees. The company announced to achieve carbon-neutrality on commuting and travel by its nearly 1.8 lakh employees and in doing so deepens its commitment to sustainability.
ii. The company will offset 3.74 lakh tonne of carbon dioxide attributed to employees' travel, and it will spend 70 crore rupees in 2015 on initiatives such as installing solar projects for rural electrification, biogas plants and distribution of smokeless cook-stoves in villages, besides afforestation.

i. Infosys became the first Indian Company to Join RE100 Renewable Energy Campaign.  The Climate Group on 18 May 2015 announced it.
ii. RE100 is a global platform for major companies committed to 100% renewable power.

i. Popular Indian stage, film and television actress Sudha Shivpuri died on 20 May 2015 due to multiple organ failure at a suburban hospital in Andheri. She was 77.
ii. Shivpuri gained popularity for her role as Baa in television show Kyuki Saas Bhi Kabhi Bahu Thi, the longest running TV show of Ekta Kapoor.

i. Eminent economist and academics Mrinal Datta Chaudhuri passed away on 20 May 2015 in Pune, Mahrashtra. He was 81.
ii. Chaudhuri who also served as the policy advisor to the previous UPA government was known for providing valuable policy inputs to the Indian planning process and the economy as a whole through his research papers. 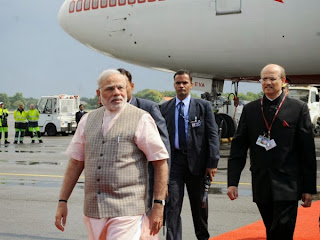 Highlights of the visit to China
• Prime Minister raised the boundary question with China and asked for an early settlement of the issue and decided to maintain peace and tranquility at the border point for maturity of relations.
• India-China signed 24 inter-governmental agreements.
• 21 business agreements worth 22 billion US dollars signed between Indian and Chinese companies.
• PM Modi inaugurated ICICI’s first branch in China at Shanghai.

Highlights of the visit to Mongolia
Modi is the first ever Prime Minister of India to visit the country
• India announced to provide one billion US dollar Line of Credit to Mongolia.
• India-Mongolia signed 13 agreements including enhancement in cooperation in border defence, air services, cyber security, renewable energy and others.
• Modi addressed to the Mongolian Parliament.
• Modi gifted a rare history manuscript to Mongolian President.

Highlights of the visit to South Korea
• Narendra Modi announced to set up a special panel to clear and fast-track South Korean investments into India. South Korea became the second country after Japan for which a special panel will be constituted.
• South Korea announced to invest 10 billion dollar for Indian infrastructure development.
• India-South Korea signed seven agreements including revised avoidance of double taxation, cooperation in audio-visual co-production, Youth Matters as well as co-operation between the National Security Council of India and South Korea.

i. The researchers have discovered the driest place on the Earth in the Atacama Desert in Chile. The site discovered is referred as Maria Elena South (MES).
ii. The results of the discovery was presented in the paper, Discovery and microbial content of the driest site of the hyperarid Atacama Desert, Chile, published in March 2015 in the journal Environmental Microbiology Reports.

i. SBI Managing Director and Group Executive (national banking) B Sriram said the pact will help its nine lakh SME customers make such transactions in a safe and secured manner.
ii. Initially, he said, the MoU aims at facilitating cross- border transactions after which domestic payments would be covered.

SEBI notified the Securities and Exchange Board of India (Mutual Funds) Regulations, 2015

i. The notified  regulations dropped the 20-25 rule requiring a minimum of 20 investors and a cap of 25 percent investment by an individual investor in a particular scheme, for certain foreign entities.
ii. The rule will not be applicable to funds managed by local fund managers in regard to Category I and/or Category II FPIs (Foreign Portfolio Investors).
iii. Earlier, the funds not adhering to the 20-25 rule were bound to appoint a separate fund manager to manage the funds.

Shanmuganthan sworn in as Meghalaya Governor

i. V Shanmuganthan on 20 May 2015 was sworn in as 15th Governor of Meghalaya at the Raj Bhawan in Shillong.
ii. His oath of office and secrecy was administered by Chief Justice of the Meghalaya High Court Uma Nath Singh. Shanmuganthan was appointed as the new Governor on 12 May 2015.

Tathagata Roy sworn in as Governor of Tripura

i. Senior Bharatiya Janata Party (BJP) leader Tathagata Roy on 20 May 2015 was sworn in as the Governor of Tripura. He became the 16th Governor of the state.
ii. The Chief Justice of Tripura High Court, Deepak Gupta, administered the oath of office at a ceremony held in Raj Bhavan.

Draupadi Murmu sworn in as first woman Governor of Jharkhand

ii. She succeeded Syed Ahmed who was recently transferred as Governor of Manipur by President Pranab Mukherjee.

i. The committee will be headed by Justice A P Shah while the other members are Dr. Girish Ahuja, a chartered accountant and former Associate Professor of Commerce, Shri Ram College of Commerce, University of Delhi and Dr. Ashok Lahiri, former Chief Economic Adviser and Executive Director, ADB
ii. The committee was appointed to resolve the contentious issue of MAT between the tax authorities and the foreign investors.

i. Hungarian writer Laszlo Krasznahorkai on 19 May 2015 won the prestigious Man Booker International Prize for 2015. His name was announced as the sixth winner of the award at the Victoria and Albert Museum in London. 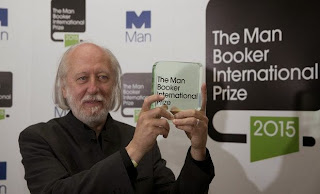 ii. Krasznahorkai, who writes in Hungarian, was chosen from a list of 10 contenders from around the world. The prize, worth £60,000, is awarded every two years for "an achievement in fiction on the world stage".

i. Root who was recently appointed vice-captain of England's Test team was named as the cricketer of the year for scoring 1135 test runs at an average of 95.
ii. Charlotte Edwards, the women’s captain won the award for consecutive second year. She was chosen for averaging above 75 in ODIs and nearly 60 in Twenty20 internationals in the season.

Anti Terrorism Day observed across India on 21st May

i. Anti-Terrorism Day was observed across India on 21 May 2015. The day is annually observed on the death anniversary of seventh Prime Minister Rajiv Gandhi who was assassinated at an election rally near Chennai by a suicide bomber from the LTTE on 21 May 1991.
ii. The day is observed to make people aware of the ongoing terrorist activities and the precautions to be taken by the commoners to prevent these acts of terrorism. Its motive is to promote unity, peace and harmony across the nation.