The Commerce Ministry's discussion paper last year listed objections it received from a national body of traders to open up B2C e-commerce to FDI:
Of all the objections, only the one which points out violation of condition for FDI in multi brand retail makes sense. The Government should lift the restriction on brick and mortar retail too - that is the only way Indian manufacturing can grow. Restricting foreign investment in retail trade - online or offline - has lost its appeal now. 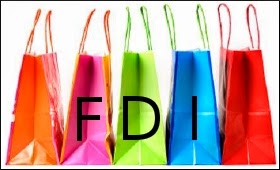