All About Greece Debt Crisis 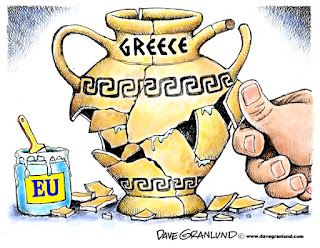 The formation of EU began in 1951, when group of 6 countries namely France, West Germany, Belgium, Netherlands, Luxembourg and Italy came together for economic integration. From the II world war itself, there had been unification attempts on terms of economic integration to avoid another world war. The geographical position and parallel economic development of these countries made this integration quite successful.

In 1951 Greece was admitted to the EU. This admittance was surprising as Greece was way behind Western Europe countries in development. But Greece was important for EU because of its Historic Connections and geopolitical relevance.

It is important to note that in 2001, Greece entered Eurozone and started using Euro as its currency.
Greece never had a comparable economy with the rest of European Union countries therefore free trade areas and economic integration didn’t make sense. This resulted in an increase in salary of Greek employees to level with the rest of EU but Greek companies could not withstand the competition. Unlike rest of EU countries Greek economy declined by being a part of EU.

Due to the EU brand, creditors lent money to Greece Government to keep up its appearance of rich country. Greek government’s spending surpassed their tax and revenue collection system beyond proportions. So for its function Greek government borrowed money to such an extent that borrowing proportions became so high that Greece's Debt-to-GDP ratio reached 1.98. As a domino effect, private lenders lost their trust in Greece government and interest rates shot up due to high risk repayment failure.

Coming Back to Present

ECB works on the rule Debt 'to' GDP ratio of any Eurozone country must not exceed 60% or if it does, the ratio shall at least be found to have "sufficiently diminished and must be approaching the reference value at a satisfactory pace". Greek government tried to evade ECB rules by performing accounting mischief, but was caught by ECB.  This further lowered down the trust in Government. As a result, ECB and Eurozone members forced Austerity measures on Greece Government which further led to economy going further down, tax collection dropping and deficits increasing further up.

By 2010, it was veering toward bankruptcy, which threatened to set off a new financial crisis. To avert calamity, the International Monetary Fund, the European Central Bank and the European Commission (they are collectively referred to as Troika) issued the first of two international bailouts for Greece, which would eventually total more than 240 billion Euros, or about $264 billion at today’s exchange rates. The money was meant to revitalize the Greek economy but the money has gone in repaying the debts, as a result of which the economy has shrunk by a quarter in five years.

v  India is the largest trading partner with EU. So there will be a direct effect on India’s Export

v  Capital movements will be affected.. It may trigger outflows from India as reflected by Finance Secretary Rajiv Maharishi

v  As the world financial markets are closely related, Investors in US and elsewhere would pull money out of India and other "foreign" stocks for the losses in Greece. So there are chances of crash of stock market of India

v  The world bond market gets into trouble, so Indian government may find it difficult to borrow money and that would affect domestic investments & growth. It may push down our currency. 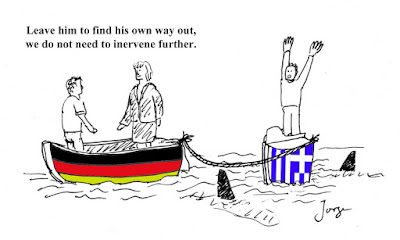