SAD DEMISE OF THE MISSILE MAN OF INDIA

We are writing this because we have lost one of the greatest intellectual personality who has devoted his life for the country. Yes, you heard it right friends, we have lost "The Missile Man". Today he was reported to have a heart attack during the lecture at IIM Shilong. This is sad because he was not only the Former President, but was also the brain behind the most successful defence research that India is having today. There was a core reason for him to be called the missile man. We don't know whether it means anything or not, but two days ago, there was an incident in Jharkhand when a minister put a garland on his photo. This might not have to do anything with this but still, our politician should be well aware of it. 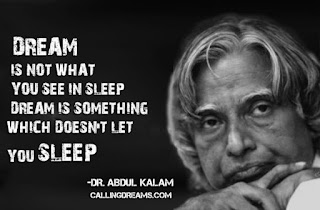 The story starts with the birth of a child on 15th October 1931 in Rameshwaram, Tamil Nadu. This child was Avul Pakir Jainulabdeen Abdul Kalam.He came from a poor background and started working at an early age to supplement his family's income. After completing school, Kalam distributed newspapers to contribute to his father's income. In his school years he had average grades but was described as a bright and hardworking student who had a strong desire to learn and spend hours on his studies, especially mathematics. After completing his education at the Ramanathapuram Schwartz Matriculation School, Kalam went on to attend Saint Joseph's College, Tiruchirappalli, then affiliated with the University of Madras, from where he graduated in physics in 1954. Towards the end of the course, he was not enthusiastic about the subject and would later regret the four years he studied it. He moved to Madras in 1955 to study aerospace engineering. While Kalam was working on a senior class project, the Dean was dissatisfied with his lack of progress and threatened to revoke his scholarship unless the project was finished within the next three days. Kalam met the deadline, impressing the Dean, who later said to him, "I was putting you under stress and asking you to meet a difficult deadline". He narrowly missed achieving his dream of becoming a fighter pilot, as he placed ninth in qualifiers, and only eight positions were available in the IAF. 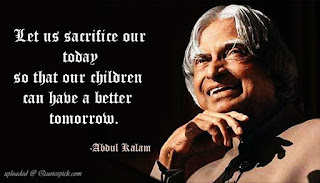 After graduating from the Madras Institute of Technology in 1960, Kalam joined the Aeronautical Development Establishment of the Defence Research and Development Organisation (DRDO) as a scientist. He started his career by designing a small helicopter for the Indian Army, but remained unconvinced by his choice of a job at DRDO. Kalam was also part of the INCOSPAR committee working under Vikram Sarabhai, the renowned space scientist. In 1969, Kalam was transferred to the Indian Space Research Organisation (ISRO) where he was the project director of India's first Satellite Launch Vehicle (SLV-III) which successfully deployed the Rohini satellite in near-earth orbit in July 1980; Kalam had first started work on an expandable rocket project independently at DRDO in 1965. In 1969, Kalam received the government's approval and expanded the programme to include more engineers.
Kalam served as the Chief Scientific Adviser to the Prime Minister and the Secretary of the Defence Research and Development Organisation from July 1992 to December 1999. The Pokhran-II nuclear tests were conducted during this period in which he played an intensive political and technological role. Kalam served as the Chief Project Coordinator, along with R. Chidambaram, during the testing phase. Media coverage of Kalam during this period made him the country's best known nuclear scientist. However, the director of the site test, K Santhanam, said that the thermonuclear bomb had been a "fizzle" and criticisied Kalam for issuing an incorrect report. Both Kalam and Chidambaram dismissed the claims. 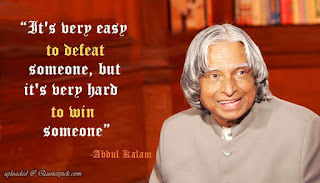 Kalam served as the 11th President of India, succeeding K R Narayanan. He won the 2002 presidential election with an electoral vote of 922,884, surpassing the 107,366 votes won by Lakshmi Sahgal. He served from 25 July 2002 to 25 July 2007. On 10 June 2002, the National Democratic Alliance (NDA) which was in power at the time, expressed that they would propose Kalam for the post of President,[26]and both the Samajwadi Party and the Nationalist Congress Party backed his candidacy. After the Samajwadi Party announced its support for Kalam, Narayanan chose not to seek a second term in office, leaving the field clear. On his selection for the Presidential Candidate, he responded

I am really overwhelmed. Everywhere both in Internet and in other media, I have been asked for a message. I was thinking what message I can give to the people of the country at this juncture.
- APJ Abdul Kalam

Post retirement, he became visiting professor in many pioneer institutes. He was known for his courage and his bluntness. He was a man with clear vision and the man with inspirational qualities. We can't do anything but to remember his contributon to the country. The movie named "I am Kalam", depicted what every child has in his heart. Let us together wish his pious soul to rest in peace and Kalam Sir, You will always remain alive in hearts of every Indian. 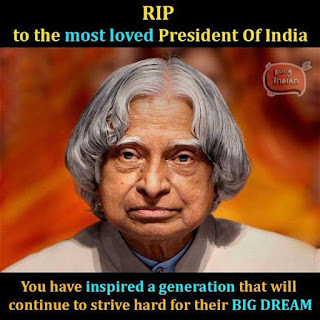